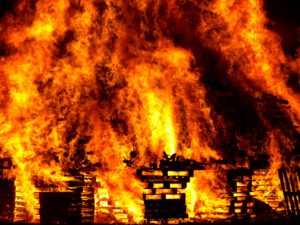 The rating or classification of a fire safe indicates the degree of protection that a safe will provide in the case of fire or attempted burglary. Safes are labelled using two different methods: construction and performance.

Construction classification relates to burglar protection and is determined by the specifications of the safe. Performance ratings are determined by tests designed to replicate safes in fire and burglary situations.

The following is an explanation of the (UL) Underwriter’s Laboratories’ fire resistant container testing procedures on the class 350°F, one hour and two-hour fire labels.

U.L. Label/Class 350°F-one hour and Class 350°F-two hour. The fire safe will maintain an interior temperature less than 350°F when exposed to fire for a period of one hour at 1700°F or for a period of two hours at 1850°F. Safe must successfully undergo all other requirements for the Fire Endurance Test, Explosion Hazard Test and the Fire/Impact Test as stated below.


After heat sensors and paper are placed inside the fire safe, the unit is locked and exposed to a uniformly distributed fire. The furnace is regulated to reach a maximum temperature of 1700°F for a period of one hour, or 1850°F for two hours, then allowed to cool without opening the furnace. The interior temperature is recorded throughout the test and during the cooling period until a definite drop is shown and must never exceed 350°F. Once cooled, the unit is opened and examined for usability. The units locking mechanisms and parts fastenings are examined for security and the interior examined for visible evidence of undue heat transmission.

The fire safe is locked and placed into a furnace preheated to 2000°F. This temperature is maintained for 30 minutes (2-hour test is 45 minutes) and if no explosion results, the unit is allowed to cool without opening the furnace doors. Once cooled, the unit is opened and examined for usability. The units locking mechanisms and parts fastenings are examined for security and the interior examined for visible evidence of undue heat transmission.

After the units’ contents are placed inside and in contact with the interior walls, the unit is closed, locked and exposed to the Standard time as in the Fire Endurance Test for the period of time stated for that classification. Within two minutes, the unit is removed from the furnace and dropped 30′ onto a riprap of brick on a heavy concrete base. After impact, the unit is examined for deformation, rupture of parts, damaged insulation, and any other openings into the interior of the unit.

When sufficiently cooled for handling the unit is inverted, reheated for the time stated and allowed to cool without opening the furnace doors. Once cooled, the unit is opened, dismantled and examinations made regarding the heat insulating properties of the sample such as usability of contents, condition of the interior finish, security of locks, part fastenings and any signs of undue transmission of heat or moisture.